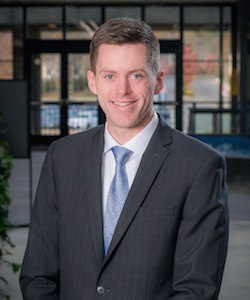 Alex Smith is a graduate of Lehigh University, in Bethlehem, Pennsylvania, where he received a Bachelor of Arts in English and History. Thereafter, Alex attended Seton Hall School of Law in Newark, New Jersey. With that decision, Alex became the fourth member of his family to attend Seton Hall Law, including his father and Smith Eibeler founding partner Bob Smith.

Alex also gained valuable work experience during his law school career, holding internships with: the Honorable Paul A. Kapalko, J.S.C., in the Monmouth County vicinage of the Superior Court of New Jersey, Law Division; the United States Postal Service, Law Department in New York City; and the Internal Revenue Service Office of Chief Counsel in Newark, where he had the opportunity to make an appearance in the U.S. Tax Court in New York City.

Alex knew that he was interested in employment law before he began law school, having learned about the field from his father. As a result, Alex focused his studies and scholastic activities in this field, as seen through his role in the Employment Law Forum. This is also what drew Alex to his internship with the U.S.P.S. Law Department, which focused almost exclusively on labor and employment litigation. Alex also wrote his Law Review note on an employment law topic, the interplay between statutory whistleblower protections and a compliance or watchdog employee’s job responsibilities.

Alex is admitted to practice in the State of New Jersey.