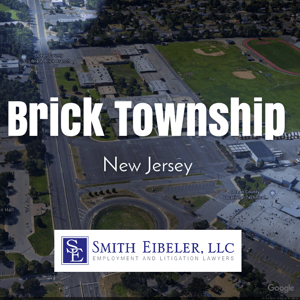 Our office is located in Monmouth County at the Bell Works building in Holmdel, New Jersey, conveniently located within one mile off the Garden State Parkway at Exit 114.

Brick Township (also commonly known as Bricktown) is located in northern Ocean County, New Jersey, bordering Monmouth County to the south. Brick Township is approximately 32.315 square miles with 6.6 square miles of water. The township’s beaches are located on the Barnegat Peninsula which is a narrow piece of land that separates Barnegat Bay from the Atlantic Ocean.

The township was incorporated on February 15, 1850 by way of a legislative act. Portions of Dover Township (now Toms River Township) and Howell Township were used to create Brick Township, named after Joseph Brick, owner of Bergen Iron Works that was located on the Metedeconk River. Later, portions of Point Pleasant Beach, Bay Head, Lakewood Township, Mantoloking, and Point Pleasant Boro were added to Brick Township.

Brick Township has earned the title of “America’s Safest City” throughout the early 2000s, according to the Morgan Quinto survey. Brick Public Schools service 9,893 students, according to the 2011-2012 school year enrollment. This school system is known for their special education programs and draw many parents of special needs children to move to this area.

Brick Township is home to many restaurants and businesses. Restaurants in Brick township include River Rock Restaurant and Bar, Rainbow Diner and Villa Vittoria. One of the largest employers located in Brick Township is Ocean Medical Center, which is part of Meridian Hackensack Health System.