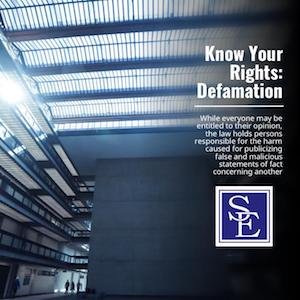 Our employment law office regularly litigates claims of defamation against former employers who maliciously interfere with employee’s ability to secure new work, obtain unemployment benefits or otherwise in pursuit of their post-separation ability to make a living.

A claim of defamation arises when a person publishes a false statement of fact that injures the reputation of another. The cause of action of defamation exists to achieve the proper balance between protecting reputation and protecting free speech. In determining whether a statement is defamatory, courts are to consider three factors: (1) the content; (2) the verifiability, and (3) the context of the challenged statement.

First, courts will analyze the content of the alleged defamatory statement by considering its fair and natural meaning to a reasonable person of ordinary intelligence. While the use of insults, profanity epithets, or insults may be hurtful, they are not considered defamatory.

Second, courts will analyze the verifiably of the alleged defamatory statement to determine whether the statement is one of fact or opinion.  Only a statement of fact can be defamatory. An opinion enjoys absolute immunity as a matter of constitutional law.   A factual statement can be proved or disproved objectively while an opinion statement generally cannot.  The more fact based the statement, the greater likelihood a court will conclude that it amounts to actionable defamation.

If you believe a former employer is making defamatory statements concerning you to others, please feel free to contact one of our New Jersey employment lawyers to discuss the specific facts of your situation. Our New Jersey Employment Lawyers represent employees in all areas of employment law, including claims that arise after the separation from employment.