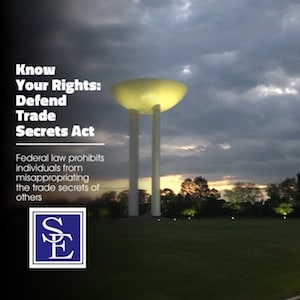 Are you a small business that has learned that a former employee is using your confidential and proprietary information against you? Are you an employee who is being unjustly accused of taking a trade secret from a former employer in order to interfere with your ability to make a living? In either case, there are federal and state laws that govern disputes concerning alleged misappropriation of trade secrets. If you are involved in a business dispute concerning an alleged misappropriation of a trade secret, you should immediately contact an experienced New Jersey employment lawyer who can provide you advice and counsel concerning your legal rights and represent your interests in the complex and often expensive legal dispute.

For employees, an important provision in the Defend Trade Secrets Act is the Whistleblower Protection provision. 18 U.S.C. 1833 (b). The Defend Trade Secrets Act protects whistleblowers from any type of legal liability when a trade secret is divulged for the purpose of reporting or investigating a suspected violation of law. This means that an employee does not have to fear liability for disclosing information an employer would consider secret in advancing concerns or complaints of unlawful conduct in the workplace. This law extends to include independent contractors and consultants as well. The whistleblower immunity provision eradicates the threat to an employee of having to defend trade secret litigation for reporting concerning illegal conduct. Such insulation of an employee allows them to complain about perceived violations of law or misconduct without hesitation or concern for retaliatory legal action. The Defend Trade Secrets Act helps prevent retaliation and further encourages people to bring forth violations of law, in confidence, to their employer, attorney or governmental agency.

The Defend Trade Secrets Act further requires employers to include a notice of whistleblower immunity in employment contracts with employees, contractors or consultants, prospectively from the time of its enactment in May 2016. The notice must advise that an individual cannot be held civilly or criminally liable for the disclosure of trade secrets when such a disclosure is made to investigate or report a suspected violation of law. This is an important provision that provides employees with additional protections from retaliation for reporting believed misconduct or violations of law. Whistleblowers now have an effective way to come forward without fear of intimidation or retaliation.