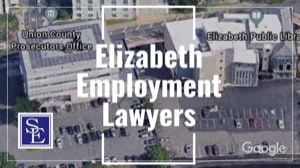 Workplace discrimination is a cancer to not only the victim but the entire work environment. Luckily, New Jersey maintains strong anti-discrimination laws that are provide for stiff penalties against employers who permit discrimination, sexual harassment and retaliation in their workplace. Our Elizabeth sexual harassment lawyers are well versed in the area of employment law and represent employees throughout Union County and New Jersey.

Elizabeth Township is found in Union County consists of 13.46 square miles. Bordered by Linden to the south; West by Roselle, Roselle Park, Union and Hillside. North by Newark. Is across the Newark Bay from Bayonne and across the Arthur Kill from Staten Island, New York to the east. In 2008, Elizabeth was named one of “America’s Greenest Cities” by Popular Science magazine and the only New Jersey city to be selected.

Elizabeth Township was originally called Elizabethtown. Founded in 1665 by English settlers. The town was named for Sir George Cateret’s wife, Elizabeth. It was the first capital of New Jersey. George Washington was sworn in as the First President of the United States in Elizabeth before sailing to Manhattan for the 1789 inauguration.

Elizabeth Township has always been at the forefront of industry. In 1873, Singer Sewing Machine Company was the first major industry to arrive in Elizabeth. The company stayed in the area until 1982. Electric Carriage and Wagon Company came in 1895 to manufacture the Electrobat. These companies were later joined by Andrew L. Riker, another electric car company. The Electric Boat Company was founded in Elizabeth. They created submarines for US Navy in 1897 in Lewis Nixon’s Crescent Shipyard. During the industrial boom of the 1920s, Duesenberg automobile plant, Durant Auto, Burry Biscuits, and Interbake Foods all came to Elizabeth.

There are many historical attractions in the area. Elizabeth Public Library has four locations. Its main campus is one of New Jersey’s original 36 Carnegie Libraries. In the 1940s this library became one of the busiest libraries in the United States. The Ritz Theater has been operating since 1926. The First Presbyterian Church was a site of many battles during American Revolution. Saint Walburga Monastery is the only Benedictine women’s community in New Jersey.

A few local restaurants in the Elizabeth area are Valenca, Michelino’s Restaurant and Urban Griddle. Phil Rizzuto Park and Veteran’s Memorial Park are a few local parks found in Elizabeth.

Elizabeth is the fourth most populous city in New Jersey. According to the 2010 census, the population of Elizabeth Township was 124,969. There are 41,596 households with a median income of $35,175. In the 2014-2015 school year there were 27,218 students enrolled in the Elizabeth Township School District.

There are many employers in the Elizabeth area. The Port Newark-Elizabeth Marine Terminal, New England Motor Freight and Jersey Gardens outlet mall are all located in Elizabeth. Little Jimmy’s Italian Ices have been in Elizabeth since 1932. Part of Newark Liberty International Airport is in Elizabeth. Neighboring Linden shares the Bayway Refinery, a Phillips 66 refining facility, with Elizabeth. This facility supplies petroleum-based products to the New York/ New Jersey area. It produces 230,000 barrels per day.

DeCavalcante crime family, one of the most infamous mafia families in the United States operates in Elizabeth. The DeCavalcante family was the inspiration for the Sopranos.

Famous authors Judy Blume, Mickey Spillane and Edward Stratemeyer were born and raised in Elizabeth. Todd Bowles, head coach of the New York Jets and former defensive back for the Washington Redskins and San Francisco 49ers also grew up in Elizabeth.