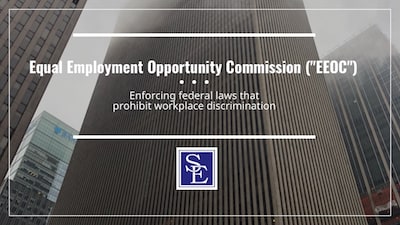 The U.S. Equal Employment Opportunity Commission (“EEOC”) was created on July 2nd of 1965. The EEOC is responsible for enforcing the federal laws that make it illegal for employers to discrimination against job applicants or employees based on a protected characteristic such as race, sex, pregnancy or disability. Employers with more than 15 employees are protected by laws covered by the EEOC, as are all types of work situations, including hiring, firing, and wage payment. The EEOC also enforces laws that restrain discriminatory and retaliatory actions against employees who complain about discrimination or participate in an investigation related to such illegal behavior.

Federal Laws are Enforced by the EEOC include the following:

In addition to these responsibilities, the EEOC also helps to streamline the process by which claims of employment discrimination are brought to federal court. It requires employees who experience discriminatory actions to first file their charges with the EEOC before pursuing their complaints in court.

The EEOC provides several services to complainants in an effort to determine whether an individual has in fact experienced discrimination as well as how the situation may be resolved legally, through either formal or informal means. Though the EEOC does not have the capacity to adjudicate, it does maintain several methods of redress. After receiving the charge filing, the EEOC informs employers of the complaint and begins an investigation into the allegations. The investigation will consist of a request for a ‘statement of position’ from the employer as well as additional information regarding the situation, which may include personnel files and personnel policies. The employers may also be asked to permit an on-site visit and to participate in witness interviews.

If the Commission finds that there is reason to believe that discriminatory conduct has occurred, they must first seek to handle the allegations and unlawful conduct through informal conciliatory means, such as mediation. If these informal attempts fail, the EEOC may choose to bring a civil action against the employer in a district court. Alternatively, if the EEOC determines that there is no reason to believe that the allegations are true, or decides not to bring a civil action itself, the Commission must provide the complainant with a “right-to-sue” notice 180 days after the charge was filed with the Commission. At this time, complainants have the opportunity to bring a civil action against their employers in federal court within 90 days of receipt of the notice.

There are several exceptions to this processing requirement. For example, in the case of an age discrimination lawsuit, employees do not have to wait 180 days for a “right-to-sue” notice. Employees need only wait 60 days from the time that they filed their charge to pursue a civil action. Similarly, those filing a lawsuit under the Equal Pay Act need not file a charge with the EEOC nor obtain a “right-to-sue” notice prior to filing.

The EEOC filing requirement is intended as a processing rule to implement procedural instructions regarding claims of discrimination in the workplace. In a recent court case, Fort Bend v. Davis, the courted determined that the requirement lacks jurisdictional capacity meaning that a failure to first file a charge with the EEOC or an incomplete filing does not prohibit a complainant from pursuing a civil action in federal court. Further, any issues a defendant may have with the plaintiff’s EEOC filing must be addressed in a timely manner in order to be considered a cause for dismissal of any charges.

If you believe you are the victim of discrimination and have filed or plan on filing a claim with the EEOC, please feel free to contact one of our New Jersey employment attorneys for advice and counsel on the particulars of your matter. We are conveniently located off the Garden State Parkway at Exit 114.