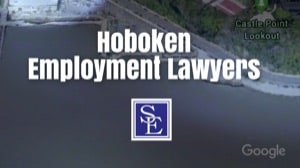 New Jersey provides for some of the strongest anti-discrimination laws in the entire country. The New Jersey Law Against Discrimination is recognized by many as one of the toughest workplace discrimination and retaliation laws. Our Hoboken sexual harassment lawyers represent employees who are forced by their employers to work in a hostile work environment throughout Hudson County and the state of New Jersey.

Hoboken is located south of Weehawken and Union City and north of Jersey City. It is across the Hudson River from the neighborhoods of West Village and Chelsea in Manhattan, New York City. The city has a total area of 2 square miles with 50,005 residents. There are 25,041 household with a median income of $101,782.

Hoboken was settled in 17th century. It was originally an island surrounded by Hudson River inhabited by the Lenni Lenape Native Americans. The land was sold to the Dutch West India Company in 1633 and later leased to a farmer who built a house and a brewery on Castle Point. In 1664, the English took possession of the area. After the Revolutionary War, the State of New Jersey confiscated the land from William Bayard, the current owner of the land.

Colonel John Stevens purchased land from the State of New Jersey at auction. This land is now the City of Hoboken. Col. Stevens built his estate at Castle Point. Stevens Gate House built in 1854, is the oldest structure of the Stevens Estate. The castle was demolished in 1959. Edwin Augustus Stevens bequeathed the estate in 1868 and founded Stevens Institute of Technology. This is the oldest technology university in the United States.

Sybil’s Cave, oldest manmade structure in Hoboken, was created in 1832 by the Stevens Family. This cave housed a mineral spring. The water from the spring was sold as a curative beverage for a penny per glass. An unsolved murder located near the cave was the basis for the short story “The Mystery of Marie Roget” by Edgar Allen Poe. He eventually transplanted the story to the Seine River in Paris, France. The cave was closed in late 1880s due to spring contamination and eventually filled in with concrete. The cave reopened in 2008.

There are many historic attractions in Hoboken. Our Lady of Grace Church, founded 1851, is one of the oldest Catholic Parishes in the United States. It is of German Gothic Style. Hoboken Public Library was built in 1897 and was the 3rd library in New Jersey. Hoboken Terminal was built in 1907 and features an original Tiffany skylight.

There are many historic neighborhoods in Hoboken. The rowhomes on Willow Terrace were commissioned by Martha Bayard Stevens for the workers at Stevens Castle. The Court Street neighborhood, also consisting of rowhomes, still has the original cobblestone road.

Hoboken has been displayed in many films and television shows. ‘On the Waterfront’, a film starring Marlon Brando, was filmed in Hoboken. Scenes from the film ‘Picture Perfect’ were filmed in Hoboken. The reality show, Cake Boss, is filmed at Carlo’s Bake Shop’s Hoboken location.

Frank Sinatra was born and raised in Hoboken. There is a star at the location of his childhood home, which has since been demolished.