Schedule a Consultation
Home
Frequently Asked Questions
How Long Does It Take to Conclude an Employment Lawsuit?

How Long Does It Take to Conclude an Employment Lawsuit? 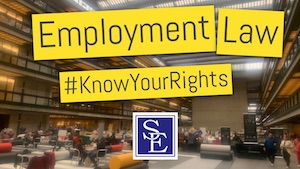 There is no easy way to predict the amount of time it will take to litigate an employment lawsuit. There are many different variables, including the strength of the claims, the damages incurred and the settlement positions taken by both the plaintiff and the defendants. The short answer is employment lawsuits can take several years to complete, whether by way of judicial determination or settlement and in others instances it is over within a matter of months if it can be resolved through a settlement.

The vast percentage of employment lawsuits never get to trial. Most employment claims are resolved prior to trial through a settlement agreement between the parties, plaintiff’s voluntarily or involuntarily dismissal by a judge. In cases that proceed to trial and reach a verdict, any appeals filed thereafter can prolong the case even further.

If a determination is made that there is a viable employment claim, the next step is to determine whether to attempt to negotiate a pre-litigation settlement of the claim(s) or file the lawsuit. If a lawsuit is filed, the employer has 35 days following service of process to file an answer to the Plaintiff’s complaint. This is called the pleadings stage of a lawsuit.

After the pleadings stage of a lawsuit, the parties will then proceed to the discovery phase of a lawsuit. The large majority of time of a lawsuit takes place in the discovery phase. The discovery phase allows both parties to learn about the relevant facts by obtaining evidence from one another and/or through third parties. Written discovery includes serving interrogatories (written questions) on other parties, that must be answered concerning relevant facts and issues of the pending lawsuit. Written discovery also includes obtaining documents, electronically stored information such as documents, emails and text messages, photographs and other forms of evidence. Depositions can also take place during the discovery phase of an employment lawsuit which is an in-person question and answer session where testimony is adduced under oath and is transcribed by a court reporter. Claims under the New Jersey Law Against Discrimination and Conscientious Employee Protection Act, two common employment claims, are subject to Track III for Discovery, which provides 450 days for the parties to complete discovery. Other employment claims are subject to Track II for Discovery, which provides for 300 days for the parties to complete discovery.

If the case survives the discovery phase and is not dismissed by prior trial motion for summary judgment, the case will move on to trial. The length of a trial depends on the amount of evidence that parties wish to introduce to the jury and in which the judge will allow it to be introduced to the jury. Trial motions, opening statements, introduction of documents, witness testimony, closing statements and jury deliberations will determine the number of days of a trial. After trial, the parties can appeal the decision of the jury or rulings of a judge during the trial, which will also increase the length of an employment lawsuit.

A lawsuit is not necessarily over after trial, and in fact, is quite common for one or both parties to file an appeal concerning the verdict at a trial. In New Jersey state court, a party can file an appeal first to the Appellate Division and then to the New Jersey Supreme Court. The time for adjudication of an appeal varies depending on the issue and when the appellate courts render their decision.

Because of employment lawsuits are time-consuming and require extensive attorney fee time and costs, there are many pressure points during the discovery phase that often make settlement a viable option to both the employer and the employee. However, not every case settles, and in the situations, cases that are not able to be dismissed by the employer can go on for many years until final resolution.