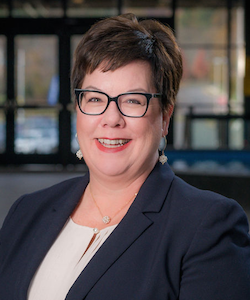 Katy (Kathryn) McClure is a partner with Smith Eilbeler, LLC. A former full-time employment paralegal who attended law school at night, Ms. McClure credits this experience with instilling in her the tenacity, dedication and judgment which she brings to bear as an advocate representing individuals throughout New Jersey who have suffered injustice in the workplace.

Ms. McClure's practice encompasses all areas of employment law including discrimination and harassment on the basis of sex, age, race, disability, national origin, sexual orientation, marital status, disability, pregnancy and domestic partnership as well as retaliation for asserting rights to work in an environment free of discrimination and harassment, including discrimination in pay. Ms. McClure also counsels and advises employees with regard to various employment matters during employment, including making requests for reasonable accommodations for a disability or pregnancy and participating in the interactive process with employers under the New Jersey Law Against Discrimination (LAD) and Title VII. Ms. McClure also represents clients with claims arising from leave law including the federal Family Medical Leave Act (FMLA) and New Jersey Family Leave Act (NJFLA).

Ms. McClure regularly represents clients in claims arising under New Jersey's whistleblower law, the Conscientious Employee Protection Act (CEPA), and the New Jersey Law Against Discrimination (LAD). Ms. McClure has achieved substantial results for her clients including a $1.1 million judgment in a three-employee pregnancy discrimination case brought pursuant to the LAD and $220,000 settlement in a whistle blower case brought pursuant to CEPA.

Ms. McClure is the Immediate Past-President of NELA-NJ, the New Jersey affiliate of the National Employment Lawyers Association, for which she previously served as Secretary and Board Member since 2011. Ms. McClure appeared as amicus curiae on behalf of NELA-NJ in Acevedo v. Flightsafety Int'l, Inc., 156 A.3d 183 (App. Div. 2017), in which the Appellate Division held that unemployment compensation benefits may not be deducted from back pay awards in LAD cases.

Ms. McClure is a Barrister of the Sidney Reitman Employment Inn of Court, which awarded her the David Solomon Award for Outstanding Service to the Inn in 2013. She has lectured for ICLE, the New Jersey Association for Justice, and other organizations, and is the author and co-author of articles which have appeared in the New Jersey Law Journal and New Jersey Labor and Employment Law Quarterly, including What to Expect When Your Employee is Expecting: How the LAD's Pregnancy Amendment Impacts the Employer-Employee Relationship, Stemming the Tide: The Appellate Division Shores Up CEPA Protection for Whistleblowers Doing Their Job and The Plaintiff’s Perspective on the 2015 Amendments to the Federal Rules of Civil Procedure: The More Things Change, the More They Stay the Same.

Ms. McClure is a 2004 graduate of Rutgers School of Law-Newark, where she was the recipient of the Myron Harkavy Award for greatest promise as a trial lawyer. Ms. McClure received her B.A. from Montclair State College She is also a former adjunct professor at Montclair State University, where she taught legal research to undergraduate students. We are happy to welcome Katy to our law firm.