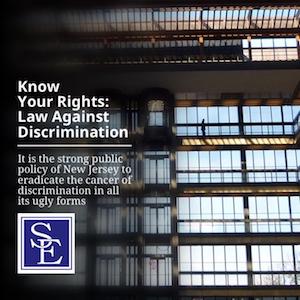 Are you being sexually harassed at the workplace? Do you believe you have been unlawfully terminated from your employment as a result of unlawful retaliation? Have you been denied a promotion or pay raise because of your race, gender or other protected class? If so, you may have a claim under the New Jersey anti-discrimination law known as the Law Against Discrimination.

The Law Against Discrimination

Discrimination at the Workplace

The New Jersey Law Against Discrimination protects employees of New Jersey from being discriminated at the workplace. There are different forms of workplace discrimination and therefore ways an employee can maintain a claim under the law. A disparate impact claim arises when an employee is deprived the privilege, term or condition of employment because of a protected characteristic such as age, ancestry, military service, color, creed, disability, marital status, domestic partnership status, national origin, sex, sexual orientation or gender identity. In these cases, our employment lawyers seek to prove that the employee was negatively impacted at his or her place of employment for discriminatory reasons, and not because of a lawful reason such as job performance or a good faith job elimination.

The New Jersey Law Against Discrimination also prohibits employers for creating or allowing the existence of a hostile work environment for any or all its employees. A hostile work environment occurs when an employee can show that the harassment would not have occurred but for the employee’s protected class (such as gender, disability, etc.) and it was severe and pervasive enough to make a reasonable person of the same protected class believe that the conditions of employment have been altered and the work environment is hostile or abusive. An employer can be held vicariously liable if they contribute to the harm through its negligence, intent or apparent authorization of the harassing conduct or if the supervisor was aided in the commission of the harassment by the agency relationship. The law requires New Jersey employers to have effective anti-discrimination laws that require them to conduct a complete and thorough investigation into a complaint of discrimination and take prompt and remedial action when discrimination occurs.

The New Jersey Law Against Discrimination not only protects employees who work in New Jersey but also individuals who are seeking employment in New Jersey. It also provides protects to persons who are retaliated against for engaging in protected activity under the statute or have an association with someone who suffers from discrimination. All employer, labor organizations and employment agencies are subject to the New Jersey Law Against Discrimination. Additionally, any person who aids and abets a violation of the law will be found liable.

Discrimination with Places of Public Accommodation

The New Jersey Law Against Discrimination extends to individuals outside the employment in places of public accommodation. Specifically, the law provides that all persons have the opportunity to obtain all the accommodations, advantages, facilities and privileges of any place of accommodation without discrimination based upon his or her race, creed, color, national origin, ancestry, age, marital status, affectional or sexual orientation, familial status, disability, nationality, sex or source of lawful income used for rental or mortgage payments. The statute provides a non-exhaustive list of places of public accommodations, which include places such as retail stores, schools, colleges and universities and a host of others. Courts have made clear that the statutory definition of a place of public accommodation is extremely broad and include places in which a person would expect to be a place where the public is invited.

If you believe that you are a victim of discrimination, feel free to call our office to speak with one of our New Jersey discrimination lawyers to discuss the particular facts of your workplace situation. We are conveniently located in Holmdel, Monmouth County, and right off Exit 114 of the Garden State Parkway.