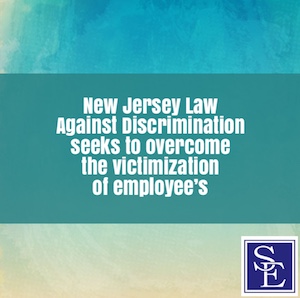 Are you being harassed at your workplace because of your gender identity or sexual orientation? Are you being treated unfairly because you are gay or your supervisor perceives you to be gay? Have you complained to your supervisor or Human Resources representative that you’re working in a hostile work environment and are now being retaliated against for making the complaints? If you have suffered discrimination because you are a lesbian, gay, bisexual or transgender, our New Jersey employment lawyers are here to fight back at those responsible for violating your rights under the law.

The New Jersey Law Against Discrimination also protects LGBT persons from being retaliated against for opposing business practices of their employer that are discriminatory based upon sexual orientation or gender identity. This means that an employee who suffers an adverse employment action because they complained of LGBT discrimination or harassment can hold the employer legally responsible for the harm caused by those actions. When the adverse employment action results in a termination of employment, the aggrieved employee can seek back pay, front pay, reinstatement and other damages resulting from the unlawful retaliation. The anti-retaliation provisions of the New Jersey Law Against Discrimination are not limited to those who identify as LGBT. Any persons, regardless of their sexual orientation or gender identity, can be unlawfully retaliated against for opposing unlawful LGBT discrimination in the workplace. These broad employment protections under the New Jersey Law Against Discrimination were enacted to stop LGBT discrimination and retaliation in all of its ugly forms.

If you believe you may have been, or are currently being subjected to discrimination on the basis of your sexual or affectional orientation, or gender identity, please feel free to contact our LGBT discrimination lawyers to discuss the specific facts of your workplace situation.