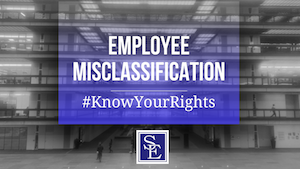 When employers fail to follow the law, they deny employees compensation, benefits and other legal protections that they have earned from their work. Our misclassification lawyers are experienced and skilled in determining whether a worker is an employee. We are ready to assist employees and answer their questions concerning misclassification and other workplace rights.

The classification a worker as an employee or independent contractor involves a fact specific inquiry and can vary depending on the test used under different employment and wage-related laws.

New Jersey uses a statutory test known as the “ABC” test in wage theft related cases. The ABC test, which was initially codified in the New Jersey Unemployment Compensation Act, is used to determine rights of individuals under the New Jersey Wage Payment and New Jersey Wage and Hour laws. Under the ABC test, a worker is presumptively considered an employee unless the following three elements can be established by the employer:

Employees who are deprived his or her rights under wage theft laws lose hard earned pay and benefits. They also do not enjoy the protections of wage theft anti-retaliation laws and other leave and unemployment benefits. The law recognizes the unfairness of an employer retaining control over an employee without providing all the benefits that are required to provide under the law.

Misclassification that goes unchecked can also deprive an individual’s rights under state anti-discrimination and anti-retaliation law. Under the New Jersey Law Against Discrimination (NJLAD) and the Conscientious Employee Protection Act (CEPA), New Jersey court’s have employed a 12-factor hybrid test commonly known as the Pukowsky test. The Pukowsky test borrows factors from the common law “right to control test” and “the economic realities test”. This test is also fact specific, closely examining the work-relationship to determine the appropriate classification of a worker and placing an emphasis on the amount of supervisory control that an employer has over a worker. The Pukowsky factors include:

The New Jersey Law Against Discrimination provides significant rights to employees who are victims of workplace discrimination, sexual harassment and retaliatory discharge. It prohibits workplace sexual harassment, retaliation, pay inequality and other discrimination workplace practices. The Conscientious Employee Protection Act also provides job protection to employees from suffering retaliation for complaining to their employers concerning business activities in which he or she has a reasonable belief to be in violation of laws, rules, regulations and/or against public policy. While both the New Jersey Law Against Discrimination and the Conscientious Employee Protection Act provide significant legal protections to persons who suffer discrimination and retaliation at the workplace, an individual must be considered an employee pursuant to the applicable test, or tests, under the relevant statute.

Our employment lawyers fight for the rights of workers who are misclassified as independent contractors so that they are afforded the same rights and privileges under the law of an employee. Employers should not be able to wrongfully deprived income, benefits and other protections to employees. If you believe that you or a family member have been misclassified and denied pay, benefits and other protections under the law, please feel free to contact to one of our experienced employment law attorneys to investigate the facts and circumstances of your particular matter.