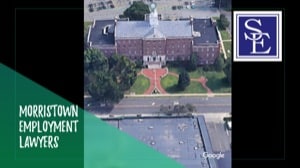 New Jersey has enacted some of the country’s strongest anti-retaliation laws. Both the New Jersey Law Against Discrimination and New Jersey Conscientious Employee Protection Act provide employees with job protection when they complain or object to workplace discrimination and other unlawful conduct of their employers. Our Morristown retaliation lawyers hold employers responsible when they terminate or take other adverse employment action against employees who voice their concerns regarding unlawful workplace conduct and action.

Morristown is located in Morris County. Its many parks, playgrounds and road access make it great community to raise a family. Morristown has a total area of 3.03 square miles and completely surrounded by Morris Township. According to the 2010 census there were 18,411 people residing in Morristown with 7,417 households with a median income of $64,279.

Morristown was settled in 1715 by Presbyterians from New York and Connecticut. It was originally called New Hanover. The village was selected to be the county seat due to its central location and access to roads. The county and the village were then named after Lewis Morris, the sitting royal governor for the British colony of New Jersey.

Morristown National Historical Park consists of many important sites from the Revolutionary War. One site is the Ford Mansion where George Washington set up his headquarters from December 1779 through May 1780. The Marquis de Lafayette came to visit Morristown twice. The first time in 1780 to inform George Washington that France was sending ships and soldiers to assist the Continental Army. His second trip was in July 1825.

Morristown residents attend schools in the Morris School District. There are also several private schools in town. The Red Oaks School, a Montessori school; Assumption Roman Catholic; The Peck School, a private day school; The Delbarton School, a Roman Catholic school; The Morristown-Beard School, private institution, and Villa Walsh Academy, a Catholic college preparatory school are all found in Morristown. The Rabbinical College of America is also found in Morristown. This is one of the largest Chabad Lubavitch Chasidic yeshivas in the world.

There are many companies based in Morristown; a few of them are Morristown Medical Center, Panalpina World Transport, Alvogen, Covanta Energy, Louis Berger Group, Schindler Group and the Morristown & Erie Railway.

A few local restaurants are Chef Fredy’s Table, Amanti Vino and Wine Cellar Morristown. The town shares a library with Morris Township. The original library consisted of over 30,000 books was destroyed in the 1914 fire. The new building was erected in 1917, with additions made to the building in 1930, 1987 and 2006.