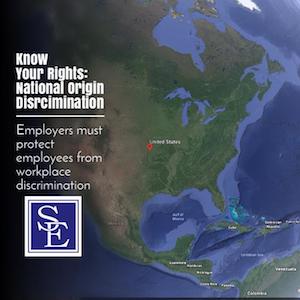 Are you being harassed at work because of your nationality? Does your supervisor treat you differently because you are not American or were not born in the United States? Have you been called a “terrorist” or been subjected to other harassing comments about your nationality at work? If so, you may be the victim of national origin discrimination and should speak to one of our New Jersey employment attorneys to investigate and help you determine whether you have an actionable claim.

Our New Jersey employment lawyers are committed to protecting employees from discrimination and unlawful harassment. If you believe you have been denied a position, terminated, or otherwise unfavorably treated in your place of employment because of your birthplace, ancestry, culture, accent common to your nationality, please send contact us to a consultation with one of our experienced New Jersey employment attorneys.