Do you believe that your employer is paying you less than your co-workers because of your sex, nationality, race, disability religion or other protected characteristic? Are you being paid less than your male co-workers for performing the same work? Has your employer reprimanded you for discussing your compensation with others or for seeking legal advice concerning a potential discriminatory wage issue? If the answers to these questions are yes, you may have rights under the New Jersey Equal Pay Act and should immediately consult a New Jersey employment lawyer to consult with concerning the specific facts and circumstances to determine if you have a viable claim.

It is all too common to learn of employers paying women employees less than their male counterparts for performing the same work. To combat the issue of unequal wage disparity in New Jersey, our legislature has enacted the Diane B. Allen Equal Pay Act (“New Jersey Equal Pay Act”) on July 1, 2018, which provides for stiff penalties to employers who do not pay their female employees the same compensation for the same or similar work than their male counterparts. But New Jersey Equal Act is not limited to just pay disparity of women and men. The New Jersey Equal Pay Act also protects wage discrimination against all other protected classes of people, including sexual orientation, race, religion, national origin, disability, and age. This, along with the stiff penalties provided for non-compliance, is why many consider the New Jersey Equal Pay Act the most progressive equal pay act in the entire United States. 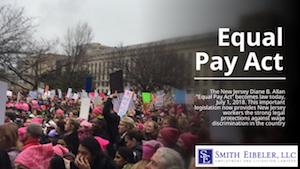 The stated purpose of the New Jersey Equal Pay Act is to further the objectives of the New Jersey Law Against Discrimination by making it unlawful for employers to engage in discriminatory compensation practices. The New Jersey Equal Pay Act also prohibits employers who are currently in violation of the statute from reducing the compensation of employees in an effort to become compliant with the mandates of the equal pay law. This means that an employer cannot decrease the salary of one employee to make up for the unlawful wage disparity of another employee who is being discriminated against in their wages.

The New Jersey Equal Pay Act allows employers to defend against any claim of unequal pay if by showing that a wage disparity between employees is based upon non-discriminatory business reasons. The law includes several non-discriminatory business reasons that an employer can point to for the differences in wages amongst certain employees, which include such factors as production, performance, training, education, and experience. If an employer can show it had a non-discriminatory reason for paying one employee more than another employee for the same or substantially same work, they will not be in violation of the equal pay law.

The New Jersey Equal Pay Act also contains strong anti-retaliation protections for employees who complain or object to their employer concerning wage discrimination. The anti-retaliation provision of the New Jersey Equal Pay Act broadly prohibits employers from taking reprisals against an employee for discussing or disclosing any information concerning employee compensation, job titles, occupational categories and protected traits of employees or former employees to other employees, provide lawyers or governmental agencies. Thus, an employer cannot retaliate against an employee for attempting to seek legal advice regarding claims of unfair wage differences.

If it is found that an employer has engaged in discriminatory practices concerning employee compensation, the New Jersey Equal Pay Act allows the affected employee to receive back pay for up to six (6) years from the date of the last occurrence. In addition, the employer will be ordered to pay an additional amount equal to three (3) times of any monetary award as additional damages. The aggrieved person is also entitled to all other damages provided under the Law Against Discrimination, which includes emotional distress damages and reasonable attorney fees and costs of suit.

By enacting the Diane B. Allen Equal Pay Act, New Jersey has taken the driver’s seat in the war against wage inequality and discrimination. If you believe you are not being paid the same for others who perform the same job duties simply because you are a women or because of another protected class, please contact our office to speak with one of our New Jersey equal pay lawyers to discuss the specific facts of your employment situation and your rights under the New Jersey Equal Pay Act.