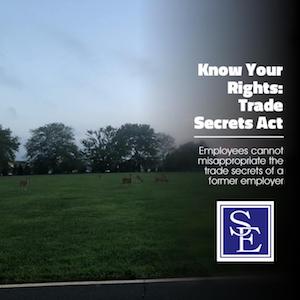 New Jersey law protects employers from harm caused when employees misappropriate their trade secrets both during their employment and after their separation. In 2012, the New Jersey legislature enacted the New Jersey Trade Secrets Act, N.J.S.A. 56:15-1 et. seq., that sets forth a statutory framework and specified penalties imposed on those who violate the statute.

The New Jersey Trade Secrets Act defines trade secrets broadly as “information, held by one or more people, without regard to form, including a formula, pattern, business data compilation, program, device, method, technique, design, diagram, drawing, invention, plan, procedure, or process, that: derives independent economic value, actual or potential, from not being either generally known to, and not being readily accessible by proper means by other persons who can obtain economic value from its disclosure or use; and is the subject of efforts that are reasonable under the circumstances to maintain its secrecy.” The New Jersey Trade Secrets Act not only prohibits actual misappropriation of a trade secret, but also permits an employer from seeking court redress with the misappropriation that is being threatened. In these circumstances, the employer can seek and obtain an order from the Court to protect a trade secret from being disseminated. An employer need not show actual harm by the threatened or actual misappropriation.

The damages and equitable relief available under the New Jersey Trade Secret Act are expansive and significant. If an employer seeks injunctive relief for violating the statute, the Court may order that an injunction to continue for a reasonable period of time in order to eliminate any commercial advantage caused by the misappropriation. An employer may be awarded actual damages suffered from the unlawful misappropriation or any unjust enrichment obtained by the liable party. A Court may also award reasonable attorney fees and punitive damages in an amount not to exceed twice of the total award for actual damages and unjust enrichment if it finds the liable party to have acted willfully and maliciously. A Court may also, in exceptional circumstances, condition the future use of a trade secret upon payment of a reasonable royalty for the period of time for which the use of the trade secret could have been prohibited.