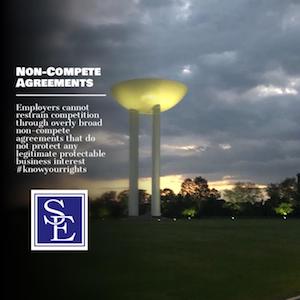 The final prong of the test is whether enforcement of the non-compete agreement would be injurious to the public. This involves a fact-intensive inquiry into aspects such as the effect that enforcement would have on the availability of goods or services in the employer’s industry and corporate investments in long-term research and development programs.

A non-compete agreement ancillary to the sale of a business is afforded far more latitude” than restrictive covenants ancillary to an employment contract. For example, a seller sells a barber shop to a buyer, and as part of the sale, the buyer requires the seller to execute a non-competition agreement that prohibits the seller from working as a barber in a ten-mile radius for five years. Because the seller would be purchasing the good-will associated with the barbershop, including its customer base, a court would likely enforce the non-compete agreement prohibiting the seller from opening a new barbershop a block away. If the seller was allowed to profit from the sale of his or her business and thereafter re-opened a new competing business within the competitive area, the buyer would lose the good-will associated with the purchase and the essence of the transaction would be destroyed.

Every non-compete agreement is different and requires a skilled New Jersey employment attorney to review and analyze the terms in order to determine whether the restriction is enforceable or non-enforceable. If you have a non-compete agreement and would like an attorney to review and provide you advice and counsel regarding the likelihood that it would be enforceable, please contact one of our New Jersey employment attorneys to schedule a consultation.