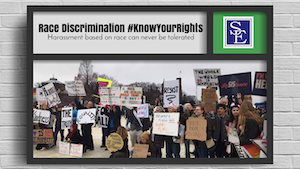 The New Jersey Law Against Discrimination

The New Jersey Law Against Discrimination is considered one of the strongest state laws in the country in stopping discrimination in all its ugly forms. The New Jersey Law Against Discrimination makes it unlawful for an employer to deny the rights and privileges of any term or condition of an employee on the basis of race. The state law also makes it illegal for an employer to retaliate against an employee because he or she makes a good faith complaint of race discrimination and also in circumstances in which an employee is required to participate in a harassment investigation. The law also requires employers provide safe work environments that prevent employees from harassment on the basis of race and for employers to have systems in place that address and remediate any form of race discrimination. Race discrimination is also prohibited under the place in places of public accommodation. Finally, the New Jersey Equal Pay Act makes it unlawful to pay employees less than others who perform the same or similar work on account of his or her race.

A hostile work environment based upon race occurs when the workplace harassment is based upon an employee’s race and the harassment complained of is severe or pervasive enough to make a reasonable person of the same race believe that the conditions of the employment have been altered and the working environment is hostile and abusive. Whether the complained of harassment is severe or pervasive entails a fact sensitive inquiry for a judge or jury to decide. Under New Jersey law, even one incident or comment of race discrimination can constitute a hostile work environment if it is severe enough under the totality of circumstances. Examples of race harassment can include the of directing racial jokes, racial slurs at an employee or in his or her presence, racial stereotyping and other conduct that occurs because of someone’s race.

New Jersey maintains a strong public policy to eradicate all forms of discrimination at the workplace and places of public accommodation. Harassment based upon race or retaliation for speaking out against race discrimination can never be tolerated. If you or a family member believe they are a victim of race discrimination, retaliation or harassment, please feel free to call our office to speak to one of our New Jersey employment lawyers about the facts and circumstances of your potential claim.