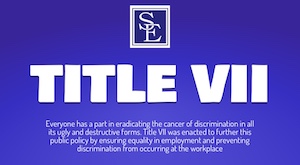 Are you being subjected to discrimination because of your sex, race, color, national origin or religion while at work? Were you terminated from your employment because you complained about discrimination? Are you currently working in a hostile work environment that has made your working conditions so intolerable that you have no choice but to quit? If yes, the federal Title VII law may provide you with job protections or a legal claim of unlawful termination.

The purpose of Title VII of the Civil Rights Act of 1964 was to ensure equality in employment and to prevent discrimination at the workplace. Title VII makes it unlawful for an employer to discriminate against employees in connection with his or her compensation, terms, conditions, or privileges of employment on the basis of sex, race, color, national origin, and religion. It also prohibits an employer from retaliating against an employee who opposes discrimination. Title VII applies to employers who have fifteen (15) or more employees and to federal, state, and local governments.

How are you protected Title VII?

Title VII provides protections to prospective employees from discrimination. For example, an employer cannot make a hiring decision based on the job applicant’s color, race, religion, sex or national origin. An employer is also prohibited from discriminating when advertising, recruiting or testing potential employees for a job.

Title VII also provides many different job protections to employees. Based on an employee’s protected characteristics, the employer cannot:

An unlawful employment practice under Title VII occurs when an employer does any of the following:

While it is the stated goal of Congress to stop discrimination through laws such as Title VII, discrimination remains all too commonplace in the work environment. If you believe you are the victim of workplace discrimination and would like to speak to one of our New Jersey Discrimination lawyers, please give us a call at our Holmdel, Monmouth County, New Jersey office.