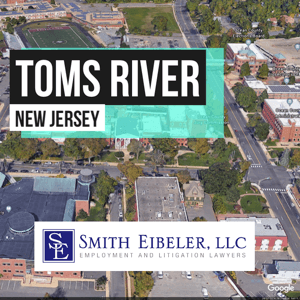 Our law firm is located in Monmouth County at the Bell Works building in Holmdel, New Jersey, less than one mile from the Garden State Parkway, Exit 114.

Joshua Huddy Park, named after Captain Joshua Huddy of the Revolutionary War, is located in downtown Toms River. This is the location for farmer’s markets, local events and concerts. Cattus Island Park, located on the Barnegat Bay, is the home to the Cooper Environmental Center and is run by Ocean County Department of Parks and Recreation. The center provides wildlife displays and educational programs to the public.

The film Amityville Horror and the television series Boardwalk Empire were both filmed in Toms River. MTV reality shows Jersey Shore and Made were also filmed here. Toms River is home to the 2nd largest Halloween parade in the World, the New Jersey Ice Cream festival and New Jersey Chili and Salsa Cook-Off.

The River Lady is a dinner cruise along the Toms River and Barnegat Bay. A few restaurants in the area include Artisan’s Brewery & Italian Grill, Baker’s Water Street Bar and Grille and Wolfie’s Deli and Restaurant, famous for their Corned Beef and Pastrami sandwiches.