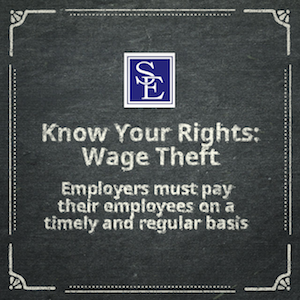 Has your employer failed to pay your earned wage or commission on a timely and regular basis? Has a former employer told you that it is not going to pay you your last paycheck or earned commissions because you quit your job or because they terminated your employment? Were you terminated from your employment in retaliation for not timely being paid your earned wages? If so, our New Jersey Wage Lawyers may be able to help you recover your unpaid earned money.

The New Jersey Wage Payment Law requires that employers pay their employees their wages on regular paydays designated in advance. Wages are defined by law as "the direct monetary compensation for labor or services rendered by an employee, where the amount is determined on a time, task, piece or commission basis excluding any form of supplementary incentives and bonuses which are calculated independently of regular wages and paid in addition thereto." This definition entitles employees to all wages owed for performed, including wage and overtime