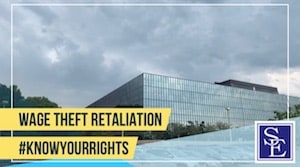 Were you fired from your employment because you objected to your former employer about their failure to pay overtime? Has your employer or former employer retaliated against you because you complained that you were not timely paid your wages? Both federal and state law provide for legal protections against employers who retaliate against their employees for opposing unlawful pay practices. If you have suffered workplace retaliation or a retaliatory discharge for complaining about an unlawful pay practice, our New Jersey wage lawyers can help you obtain your lost wages and other damages resulting from the retaliation actions of your former employer.

New Jersey has enacted several laws that afford employees who oppose unlawful employment practices concerning their wages protections against retaliatory actions taken by their employers. These laws include the New Jersey Wage Payment Law, the New Jersey Equal Pay Act, the New Jersey Conscientious Employee Protection Act, and the Law Against Discrimination. Each of these laws contain provisions designed to safeguard employees who oppose unlawful or discriminatory conduct by their and provide remedies for those who suffer adverse employment actions as a result of coming forward with their complaints.

The New Jersey Wage Payment Law was amended in 2019 to expand the law’s anti-retaliation provisions and provide for stiff penalties against employers who retaliate against employees for opposing pay practices prohibited by the act. If the employee suffers an adverse employment action (including termination) within 90 days of making their complaint, the law creates a rebuttal presumption that the action was taken by the employer in retaliation for the employee’s wage violation complaint. The employer must prove by clear and convincing evidence that the adverse employment action taken against the employee was for legitimate reasons unrelated to the wage theft complaints. As a result of the 2019 amendments to the New Jersey Wage Payment Law, an employer who takes a retaliatory action against an employee for filing a complaint under the wage law will be liable for a disorderly persons offense and be subjected to possible fines. The employer will also be liable to the employee for all lost wages resulting from the retaliation, plus liquidated damages equal to 200 percent of the amount of the wages lost. An employee who were terminated and who succeeds in a retaliation claim under the New Jersey Wage Payment law can obtain reinstatement to his or her prior employment and be awarded reasonable attorney fees and costs incurred in litigating his or her claim.

New Jersey’s Equal Pay Act, which was passed into law in 2018, includes broad anti-retaliation provisions that protect employees who suffer retaliation for engaging in protected activity concerning unequal pay violations. Under the New Jersey Equal Pay Act, an employee cannot be subjected to reprisals for discussing or disclosing any information concerning his or her own or another employee’s compensation, job title, occupational category and protected traits to any current employee, former employee, lawyer, or governmental agency. The anti-retaliation provision’s protection includes safeguards for employees who share wage information to an attorney for the purpose of securing legal advice. An employer who retaliates against an employee in violation of the New Jersey Equal Pay Act can be liable for back pay damages up to six years from the date of the last occurrence of retaliation and treble damages in an amount up to three (3) times the monetary amount awarded by the Court. Reasonable attorney fees and costs are also recoverable in under the equal pay law.

The New Jersey Conscientious Employee Protection Act (CEPA) makes it unlawful for employers to take adverse employment action against employees who disclose or object to certain actions that the employee reasonably believes are either illegal or in violation of public policy, including complaints regarding pay practices. However, under CEPA, even an employee who complains erroneously is still protected from workplace retaliation so long as the employee can identify the specific terms of a statute, regulation, or clear expression of public policy that they believed was being violated, and they prove that their belief that there was a violation was objectively reasonable. Courts have recognized that employees who bring a whistleblower retaliation law under the CEPA statute based upon the New Jersey Wage and Hour law meet the heightened CEPA element of public harm. An employee who is successful in bringing a retaliation claim under CEPA can be awarded compensatory damages, emotional distress damages, punitive damages and reasonable attorney fees and costs.

Lastly, the New Jersey Law Against Discrimination (NJLAD) is New Jersey’s general anti-discrimination law. Included in the NJLAD is an anti-retaliation provision which protects employees who are subjected to retaliatory conduct by their employer for opposing acts of discrimination in the workplace. Employees who believe his or her employers have discriminated against their employees with regard to their compensation because of an employee’s sex, age, race, national origin, religion, and/or other protected characteristics cannot be retaliated against for opposing such unlawful practices. The New Jersey Law Against Discrimination provides for compensatory damages, emotional distress damages, reinstatement, punitive damages and other damages resulting from personal harm.

New Jersey has some of the strongest anti-retaliation laws in the United States when it comes to wage theft, wage and hour violations, unequal pay and other discriminatory employment practices. If you or a family member believe to have suffered unlawful retaliation in connection with their hard-earned wages, please contact one of our New Jersey wage retaliation lawyers. Our employment law firm is conveniently located in Holmdel, Monmouth County, New Jersey, at the Bell Works building off Exit 114 of the Garden State Parkway.