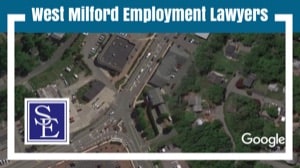 Both federal and state law make it unlawful for employers to discriminate against employees at the workplace. Employers who fail to have in place effective anti-discrimination policies can be held liable for workplace discrimination, harassment and retaliation against their employees. Our West Milford sexual harassment lawyers represent employees who are forced to work in a hostile work environment throughout Passaic County and the state of New Jersey.

The township was settled by Dutch from Newark area. It was originally named New Milford, after Milford Connecticut. When the founders applied for a post office in 1828, New Milford in Bergen county’s application was approved first and therefore Passaic County township was then named West Milford.

West Milford Township is called the “Heart of the Highlands”. It has a total area of 80.32 square miles with 5.23 square miles of water. The township borders Bloomingdale and Ringwood in Passaic County; Butler and Kinnelon in Morris County; Vernon and Hardyston in Sussex County and Warwick in New York. Approximately 40 lakes can be found West Milford. About two thirds of the township is undeveloped, state protected forests.

Jungle Habitat was a wildlife theme park opened in 1972 by Warner Brothers. There were various problems throughout Jungle Habitat’s tenure in West Milford; including a lion attack and wild animal escapes. The park closed in 1976. Many of the remaining animals were relocated to the safari at Great Adventure, now called Six Flags Great Adventure, in Jackson Township, New Jersey.

West Milford is known to be recreational area. There are many lakes, rivers and parks. The Pequannock River watershed can be found in West Milford. This watershed is owned and operated by the City of Newark and provides water to Essex County. West Milford Museum is located at the M.E. church which was built in 1860 and is staffed wholly by volunteers.

West Milford is only 38 miles from New York City, yet maintains a small-town feel. Most of the businesses in this area are in the service sector. You will find many businesses like attorney offices, medical practices and realty agencies.

The New Continental Hotel and Restaurant is a family run 15-room inn servicing visitors and residents of West Milford. Pioneer Bar and Grill and Blini Restaurant Pizza and Bar are two restaurants found in West Milford.

The film Clinton Road is based on the supposedly “haunted” road in West Milford. The actual Clinton Road has had many ghost sightings and strange creature sightings. It is said that the escaped animals from Jungle Habitat survived, crossbred and live on Clinton Road. The Clinton Furnace, listed on National Register of Historic Places, is mistakenly believed to be a druid temple, also located on Clinton Road. in May 1983, a human body was found in the woods near Clinton Road. The man was identified as a mafia related criminal. Apparently, his body was frozen in order to confuse the time of death.