Schedule a Consultation
Home
Frequently Asked Questions
What is a Wrongful Termination?

What is a Wrongful Termination? 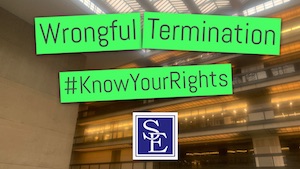 The term “wrongful termination” is used to describe the situation in which an employer terminates an employee in violation of federal, state, local and/or common law. There are many ways in which an employer can violate federal, state, local or common law in making the decision to terminate an employee from his or her employment. Examples can include a discriminatory discharge, retaliatory discharge, unlawful harassment, breach of contract and breach of employee handbook or manual.

Employees who are terminated for making a reasonable and good faith complaint of discrimination or other unlawful activity, or participating in a workplace investigation, may have a claim of wrongful termination. New Jersey law has several anti-retaliation statutes, including the Law Against Discrimination, Equal Pay Act and the Conscientious Employee Protection Act. If an employee engages in protected activity under an anti-retaliation law, an employer cannot terminate his or her employment in retaliation for engaging in the protected activity. Examples of a retaliatory discharge include terminating an employee for taking a protected medical leave, complaining about OSHA violations, firing an employee because they complain about sexual harassment or terminating an employee because he or she filed a claim for workers compensation benefits.

An employee whose employment is terminated because of unlawful harassment may have a claim of wrongful or unlawful termination. Employers have a legal obligation to provide a safe work environment free of discrimination. This obligation includes having effective anti-discrimination and anti-harassment policies in place that are well-publicized and include mandatory training to its managers. Complaints of discrimination must be investigated promptly and thoroughly by an employer. When employers allow employees to work in a hostile work environment, they can be found liable for the damage their negligence causes to the victim. If an employee is constructively discharged, which occurs when an employee is forced to resign because of the continuing and intolerable hostile work environment that is causing emotional or physical distress because the work environment, an employer can be held liable for wrongful termination or unlawful termination.

Breaching an employment agreement by terminating an employee can be considered a wrongful or unlawful termination. Breach of contract claims in the employment context are not as common as other employment termination cases because most employees are employed in an “at-will” basis.

Terminating an employee in violation of an internal employment policy could also give rise to a claim of wrongful or unlawful termination. In certain circumstances, representations made by an employer in employment handbooks can constitute a unilateral contract of job protections and job benefits. The determination of whether an employment policy or manual can be enforceable will depend on the meaning and effect and the circumstances under which the policy was prepared and distributed. Most of the time, an employment manual or handbook will contain language that states nothing in the employee manual or handbook shall be construed as creating a contract and that the employment is at-will. This language, commonly referred to as a “Wooley disclaimer” protects an employer from creating any contractual obligation to their employees that is necessary to support a claim of wrongful or unlawful termination.